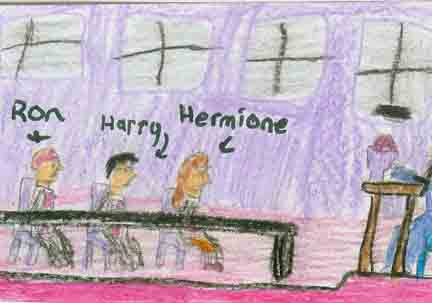 One day Harry was sitting at his Gryfindor table which is in a school of Hogwarts witchcraft and wizardary. He was waiting to find out who was going to be the champions in the Triwazard tournament. Surprisingly, Harry's name was called out, but he was underage, still he had to do it. So Harry did all three tasks. In the final one he reached the cup at the same time that Cedric Diggory, another champion, reached it. They got transferred to another place. You'll have to read the book to find out what happens next.

I thought this book was very exciting because when Harry was doing the 3rd task he had to battle a lot of different kinds of magical creatures! I liked this book because it just sucks your mind into a totally different world because you get so involved. The book was also sad. There was one time when someone dies. I did not think that could happen because Harry and his friends are wizards. This book is part of a series. It is similiar to the other books because Harry has the same friends and the same enemies. I just loved this book because it is so amazing!

I recommend this book because it is exciting. This book will get you chewing on your fingernails because you never know what will happen next. I think people who like using their imagination and like adventure stories will enjoy reading this book because it is packed with both. If you like to itch with anticipation this book is definitely for you!

SD
is a student in
Mrs. Merski's 4th Grade Class