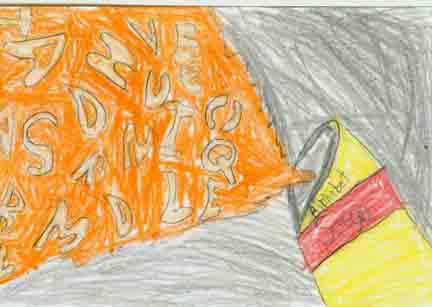 The Hostile Hospital is a very funny book by Lemony Snicket. It is about three orphans who are trying to stop an evil man named Count Olaf(not a vampire) from stealing an enormous fortune given to them from their parents' last will. In almost every book, Count Olaf has a different disguise that doesn't trick the clever orphans at all. In this book there are fires, singing volunteers, fake surgeons, and even a failed attempt to remove someone's brain. I would tell you more, but I don't want to give away the ending.

I like this book for quite a few reasons. One reason is because of the illustrations. They are pretty comical for drawings. Another reason is that there is an anagram that is fun to figure out. An anagram is when letters in a word are switched around and are supposed to be unscrambled to make the original word. You can tell that this is a good book before you read it, because it is the eighth book in the series. My favorite part was when Sunny opened a can of soup with her teeth. My favorite character is Klaus because he is smart enough to figure out the difficult anagram. This book isn't similiar to the other books in the series and it's not similiar to anything in my life. (Thank goodness!) The author also puts in a few odd comments about the book. There is usually a surprise ending. That is why I like this book.

JL
is a student in
Mrs. Merski's 4th Grade Class