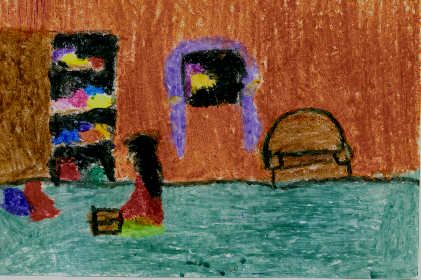 The city of Ember . . . . . . a city in pure darkness. The only sources of light are the huge flood lights that loom over the streets. The lights are only on from 6 A.M. to 9 P.M., but sometimes they go off in the middle of the day because the generator is falling apart. When the generator goes off, nobody dares to move. No one has been outside the city. For all they know, they're the only things that are alive in the elusive darkness.

Doon Harrow has an idea. An idea about how to save the city from darkness. There's only one problem: When kids turn twelve, they draw a piece of paper from a hat to determine their job for them. Doon got the job of a messenger (a person who gets messages from people and delivers them to others). But lucky for him, Lina Mayfleet pulled the job of the pipeworks, the place where the generator is located. So, they traded jobs. Lina loves her new job, but Doon has second thoughts about his. He can't fix the generator; it is too complex.

After a five minute blackout, everyone comes to the conclusion that their city is doomed. But after Lina finds a box in her closet that holds some type of directions, maybe the city is not. The directions lead them on an amazing journey that questions their strength and intelligence. Will this puzzle lead to the rescue of their town? A suspenseful book that leads to a sequel.

I liked this book because it was very suspenseful. It left me hanging from page to page and chapter to chapter. I related to the characters well because of their wide range of personalities that alomst anyone could relate to. I also enjoyed the fact that the reader was as clueless as the people in the story. I was thoroughly satisfied by the author's taste in detail and originality. The story is blooming with creative plots and realistic sitiuations.

I recommend this book for ages nine and up because there are a few words and plots that would be difficult for younger children to comprehend. This book attracted me and got me hooked. I was so hooked that I didn't stop reading till I was done with the book! A book like that deserves attention!