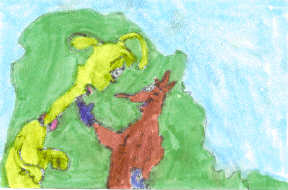 I liked this book because it was funny. It's funny because the words sometimes don't make sense. Dr. Seuss sometimes puts words together that don't belong together. On pages where the words begin with the same letter, I sometmes say the wrong words and that makes it funny.

My favorite part of the book was when Mr. Fox tried to get Mr. Knox to chew blue goo with the Goo-Goose. I liked this part best because it was funny. Geese don't eat blue goo and that makes it funny. Besides that, it was funny trying to read all those words that begin with the same letter.

This book is different from other books I've read because a lot of things happen in this story that don't really happen in real life. Dr. Seuss uses a lot of imagination because he makes up words and characters that aren't real.

I reccommend this book because it has a lot of funny things in it. It will make you laugh as you try to read the words. I think that first and second grade kids would like to read this book.