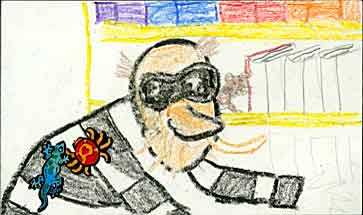 The book is about an old man named Mr. Brown. He had a bookstore. A burglar came one day and saw keys on a hook and he took the keys. Then a book fell on his head and a little kid said that there is a ghost in the bookstore. The burglar left than the cat was scratching the hook and Mr. Brown said he didn't have time to play. So he went back upstairs and the cat waited for the burglar. The burglar came and opened the door. The mice were kicking the books on the floor and the cat was scratching the blinds to scare the burglar. Mr. Brown thanked the cat and the mice for scaring the burglar and they all ate some cheese.

My favorite part of the book was when the burglar got scared and ran and left the key in the door. I like the book because it teaches a lesson not to rob stores. I liked the illustrations because they are colorful.

My mom, my dad, my family and the teachers would like this book because it teaches you not to rob and that friends look out for you.