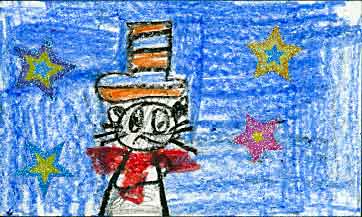 The book is about the Cat in the Hat. Sally and the boy both sat and sat and sat and they couldn?t do anything because it was raining a lot. Then the cat in the hat came and then they played new games. Sally and the boy didn?t like the games. He was standing on a ball and he had a lot of things he was holding. He was holding a dish with milk, books, a rake, and a fish on the top. Then he fell down and he bent Sally and the boy?s new rake. The Cat in the Hat made a big mess because of thing one and thing two. Thing one and Thing Two flew a kite in the house and they bumped into everything and they made a big mess. Then the fish said to the boy to catch Thing one and Thing Two. The Mom was coming to her house and then the fish said to clean up all the stuff. The Cat in the Hat came with a fancy car and there were a lot of hands on it. He cleaned a big big big mess that Thing One and Thing Two made. The Mom came in the house. She said what did you do today? Did you do something fun today?

I recommend the Cat in the Hat to children in kindergarten, first grade, and second grade. The children will think it is funny. My baby sister will like it because she will laugh and giggle.