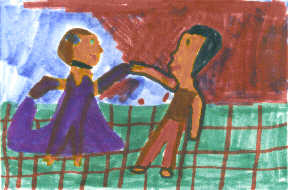 This book is about a girl named Ella. Her mother died and her father married another woman who had two daughters. Ella's father died a little bit after he got married. Then the stepmother showed that she was only interested in her two daughters because she spent her money on jewelry for them and none for Ella. Ella's name changed to Cinderella because her stepmother made her clean out the fireplace every day and she got cinders all over her. Then one day the king decided that his son, the Prince, should get married. The king planned a ball. Every girl was invited to the ball. But the stepsisters tore up Cinderella's gown and she didn't have a dress to wear to the ball. Then a fairy godmother came to help Cinderella so she could go to the ball. You have to read the book to find out what happens next.

I liked this book because it is a fairy tale. I really like fairy tales alot. I can pretend to be the characters in the story. My favorite part of the book is when Cinderella got married to the Prince. I liked that part best because it is exciting and Cinderella looked very pretty. The two stepsisters reminded me of my sister and myself because sometimes my sister and I fight like the two stepsisters in the story. This book is different from other books I've read because this one has a fairy godmother and the other books I've read don't.

I would recommend this book because it is fun to read. The pictures make you want to read the story to find out what happens. Some of the words are hard to read so you might want your parents to read this book to you first before you read it by yourself. I think most third graders could read this book without any help.