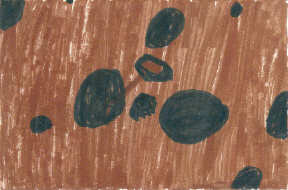 This book is about a boy named Stanley who ends up with shoes that seem to come from the sky. The shoes belong to Clyde Livingston so Stanley has to go to a judge. The judge gives him two choices of places to go for taking the shoes. Stanley can go to Camp Green Lake or jail. Stanley chooses to go to Camp Green Lake. The warden at the camp makes Stanley dig a hole five feet deep and five feet wide. Did Stanley make the right choice? Or would it have been better if he had gone to jail, instead? You'll have to read the book to find out.

This chapter book does not have any pictures. I thought that this book was really awesome! It was awesome because when Stanley ran away he saw a hole filled with lizards. This was my favorite part because even though he was in danger he was able to get out of it. Stanley is my favorite character in this book because he reminds me of myself. In this book, Stanley gets into trouble for something he does not really do. Sometimes I've gotten into trouble for things that I haven't really done, so I know how Stanley felt.

Kids in the second grade who are good readers and those who are older could read this chapter book. Kids who like unusual stories and ideas that are hard to predict, would REALLY like this book. The setting in this book is very different from most stories I've read. It takes place at a camp. That's another reason why I would recommend this book. It takes places in an unusual place.

Farhan B.
is a student in
Mrs. Dengel's 2nd Grade Class