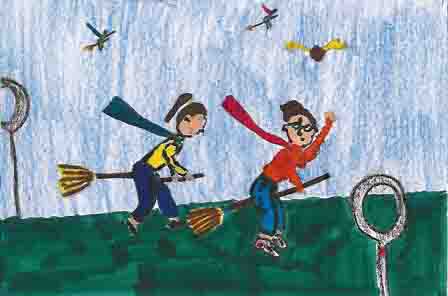 This book is about a boy named Harry Potter who has to live with his mean Aunt Petunia and Uncle Vernon. At his aunt and uncle's house, Harry gets treated very badly. Harry receives a letter that invites him to Hogwarts School of Witchcraft and Wizardry. Hagrid, the Keeper of the Keys, brings Harry to Hogwarts. At Hogwarts, Harry meets a boy named Ronald (Ron) Weasly, and a girl named Hermione Granger. They go through a lot of scary things just to get the Sorcerer's Stone. If Harry doesn't get the stone, then Voldemort will! There are three different bottles that they can choose to drink to get the stone. If they drink the correct one, they get to go on. They also try to get passed a three headed dog. Its name is Fluffy although its name doesn't fit it at all. They also have to go through a live chessboard. Read the book to find out all the adventures they have including Ron having to risk his life for Harry and Hermione.

My favorite part of this book is when Harry has to go to platform 9 3/4. At the train station Harry has to ask everyone where the platform is, but they all say there is no such thing. That's where Harry meets Ron and his family. They show him to the platform. Everybody except Harry and the Weaslys (at the train station) are Muggles. This book reminds me of when my brother always used to get me in trouble. In the beginning of this book, Harry's cousin, Dudley, always got Harry in trouble, just like what happened to me. Dudley was very nosy, spoiled, and mean. That made Harry very depressed. After Harry got to Hogwarts he changed. Instead of depressed he was now adventurous and daring. When you read this book you will see how much and why Harry changed.

I recommend this book to people who enjoy reading magical and humorous books. It's like a mystery book too. I think you should read this book to see what it's like being a wizard.