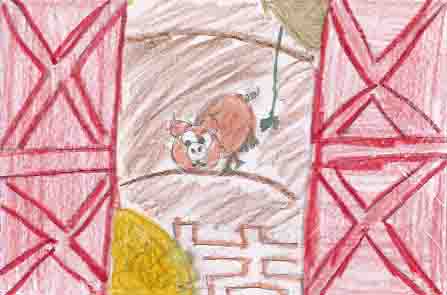 I just read a fascinating story about a creative spider, Charlotte, who tries to save of all things, a pig's life. Wilbur is the little pig she wants to save. His owners have the idea that Wilbur is a runt and too small or weak to be anything but dead. Charlotte, the spider, takes it upon herself to help Wilbur, so he won't end up on someone's plate as bacon or pork chops. She decides that by spinning words in her web like SOME PIG, TERRIFIC, and RADIANT she could help Wilbur. Everyone thought Wilbur wrote the words, and that made them think he was a very unusual pig. I feel that if I had a friend as intelligent and loyal as Charlotte I would be very lucky.

My favorite part of the story is when Charlotte told Templeton, a mean, selfish rat, to go to the dump to look for words she could spin in her web. Templeton did not want to go but he ended up doing it. I liked this part because it made me laugh. Templeton was grumpy sometimes, and I admit that I can be grumpy, too.

This book showed me how true friends fight for each other and makes me want to recommend it to anyone who has or wants a great friend. I also recommend it if you like stories about animals, especially ones that talk. I wish my dog, Sandy, could talk to me. Sometimes I feel like she's going to say something any minute. Maybe someday she will!