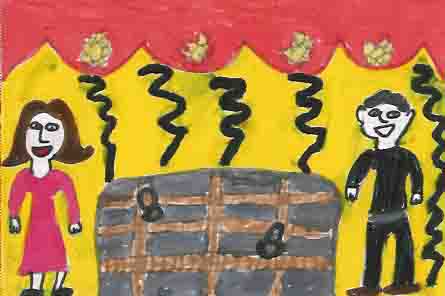 This book is about a boy whose name was Ehrich Weiss. Along with his brother, Theo Weiss, Ehrich would do card tricks for the block and for the kids on the street. When Ehrich was sixteen he went to the library and got a biography on Robert Houdin, a magician. Ehrich's name sounded like Harry and to honor his hero he changed his name to Harry Houdini. Harry did magic shows at theaters and clubs. He challenged the cops to handcuff him from top to bottom. It didn't take Harry long to get out. Harry did lots of dangerous tricks. For example, he attempted to escape from a water tank while he was wearing a straight jacket. If you would like to read more about Harry's adventures, read this book.

I liked this book because when I read it I wanted to be like Harry Houdini. I have always loved magic. I know a few card tricks, and like to try them out on my friends and family. Harry was very daring because he risked his life having the policemen put him in handcuffs, and other life-threatening tricks. I don't think I'm that daring, but it's fun to read about someone who is.

I recommend this book to anyone who enjoys magic or magicians. It tells how to do one of Harry Houdini's special tricks. It was fun reading this book.