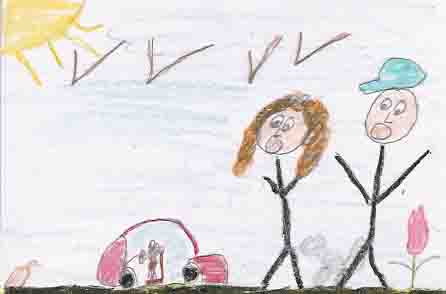 This book is about a little mouse named Stuart Little who is always on an adventure. He's part of a family of people. There's also a cat named Snowbell who is always trying to eat Stuart. One day Stuart meets a bird named Margalo. He thinks she is beautiful and doesn't want anything to happen to her. Snowbell and her friend try to eat Margalo when Stuart's parents go out. A pigeon overhears them and writes Margalo a letter. The next morning Margalo sees the letter and doesn't know what to do so she heads north. Stuart searches for his dearest friend, Margalo, and ends up going on a big adventure. He meets new people, goes to new places, and experiences new things.

My favorite part of the book was when Snowbell and her friend planned to eat Margalo. It was sad because Margalo flew away without telling Stuart. Stuart Little reminds me of someone in my family. This person is my dad. Stuart reminds me of him because if my dad ever knew that someone or something was missing he would keep on looking for them and never give up. Stuart kept looking for Margalo, a character who changed the most in the story. She was very happy at the start but was scared to death of something awful.

I recommend this book to people who like to read about adventures because the story takes Stuart Little to different towns far away like Ames Crossing. This book is also a classic because the author, E.B. White wrote other important and famous books like Charlotte's Web and The Trumpet of the Swan.