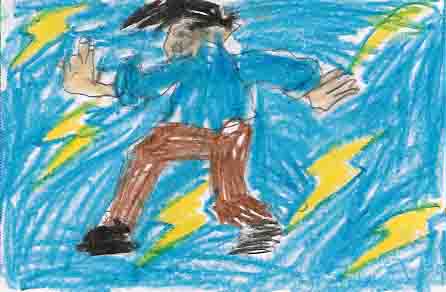 This book is about a man named Jackie Chan, his niece Jade, his uncle and a friend named Captain Black. Together they are on a mission to find twelve magical stones called talisman. Each talisman has a picture of an animal and has a magical power. The dog talisman can make you immortal and the horse talisman can heal you. Jackie and his friends have to find the talisman because an evil group called the Dark Hand wants to find the talisman too and if they do they will give it over to their master, Shendu. Then they will get to rule the world. Somehow, Valmont, the leader of the Dark Hand and his men get all the talismans and give it to their master, Shendu. Shendu gets all the powers and it is up to Jackie Chan to stop him.

I liked this book because it has a lot of action in it. My favorite part is when Shendu used the fire power of the dragon talisman and hit Tohru, a mighty enforcer of the Dark Hand with a massive fireball. When Tohru woke up from the blast the fireball had burned all his clothes and Tohru only had underwear and he looked funny!