Goosebumps- Piano Lessons Can Be Murder

Goosebumps- Piano Lessons Can Be Murder 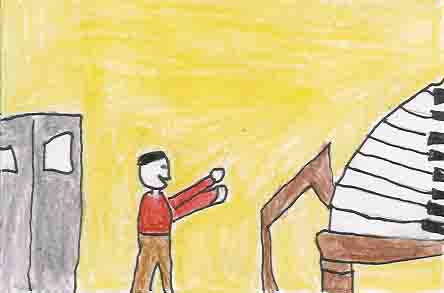 This book is about a boy named Jerry who moved to a new house that is three times bigger than his old one. Jerry loves to play pranks on his parents. When Jerry investigates his attic he finds a piano. The family moves the piano into the living room. Jerry's father asks Jerry if he wants to learn how to play the piano. He found an ad for a piano teacher named Dr.Shreek. After the first lesson Jerry wants to quit. He hears stories about students going in for a lesson and never coming out. Mr. Toggle, the janitor catches Jerry coming out in the middle of a lesson and corners him in a room with human hands floating above pianos. What's going on? Read the book to find out!!

My favorite part of the story is when Mr. Toggle cornered Jerry in a room because there were human hands floating over the pianos. Jerry reminds me of me when I started playing the piano.

I recommend this book because it'[s creepy. I also recommend it because it's hilarious how Jerry pretended two dust balls were rats. It is also full of adventure like when Jerry meets a ghost. This is an excellent book.