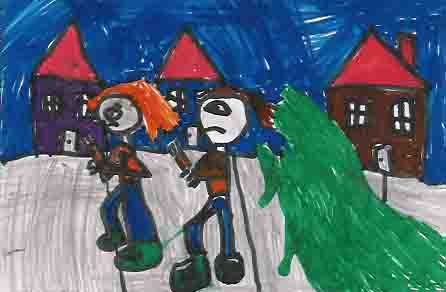 My favorite part of the book is when the Monster Blood disappears and Aunt Katherine isn't deaf anymore. Aunt Katherine had been cursed with deafness by her cat but was freed from the curse when the cat was destroyed. This was my favorite part because Aunt Katherine could lead a happy life as a hearing person. The cat was destroyed and could not hurt anyone else! My favorite character is Evan because he is brave. I think Evan is brave because he didn't run away when neighborhood bullies were bothering him. Evan also has a good sense of humor. He makes sarcastic jokes about himself. Evan seems mature because even though he missed seeing his parents, he made the best of his visit with his Aunt Katherine. I can relate to this story because I like to make new friends and have adventures. I also try to make the best of an uncomfortable situation.

I recommend that you read this book because it's an interesting and creative way to tell a story about friendship, bravery, and unknown creatures. There is suspense, drama, and action! It is a good book for people who like scary stories. I can't wait to read Monster Blood II and III!