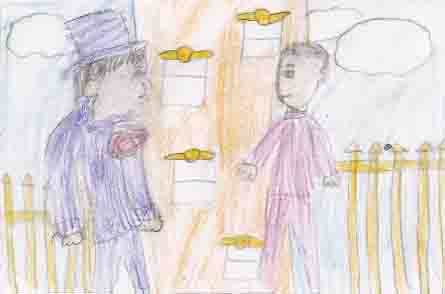 This book is about a little boy named Oliver Twist. His mother dies after Oliver was born and he is an orphan. Mr. Bumble is the greedy parish official in charge of where Oliver was raised called a workhouse. Oliver plans to go to London where he bumps into another orphan, the Artful Dodger. He belongs to a club and he takes Oliver to eat. Oliver meets Fagin, the boss of the kids that steal. He teaches Oliver how to steal. The boys go to steal and Oliver goes with them. They steal a handkerchief from a man, Mr. Brownlow, and only Oliver gets caught. Mr. Brownlow realized it wasn't Oliver who stole the handkerchief. He takes Oliver home and tells him to take books and money to the bookshop. He doesn't come back because Fagin tricks him into coming to his place. They thought he was going to tell on him. After, he finds his Aunt Rose.

I love this book because sometimes it's funny, sad, and loveable. My favorite part was when Oliver found his Aunt Rose. I'm so glad he found a part of his family. I felt sorry for Oliver Twist because a lot of sad things happened to him. Oliver didn't have a home, a family, and he had to work in a workhouse. I have a home and if I didn't I would feel sad.

I recommend this book to kids who have a home so they can know what it feels like to be homeless. This was also a classic that was written by a famous author, Charles Dickens.