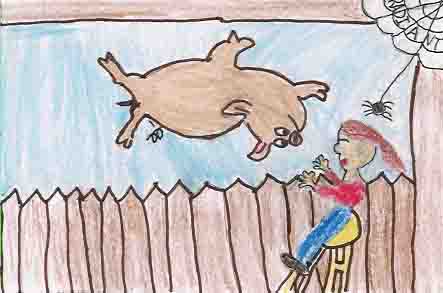 This book is about a friendship between a spider named Charlotte and a pig named Wilbur. Fern, a little girl who saved the pig from being killed, raised Wilbur until he was two years old. Then he was sold to her uncle, Homer Zuckerman. Wilbur wasn't very happy at the Zuckerman's farm because nobody would be his friend. One night Wilbur heard a voice that said, "I have been watching you. I will be your friend." That's how Wilbur first meets Charlotte who tells Wilbur that the Zuckerman's are going to kill him at Christmastime. Wilbur tells Charlotte he does not want to die and Charlotte promises to save him. The book is the story of how Charlotte, a little tiny spider saves Wilbur's life.

I think this book was very interesting because in real life animals can't talk and children can't understand animals. It was interesting to read what the animals were thinking. I would love to talk to my pets and see what they were thinking. I also learned a lot about spiders, like they can make big webs between two pieces of long grass. They are also blood- eating insects.