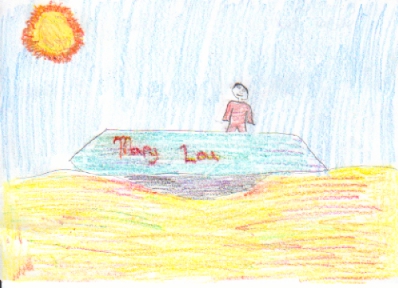 It was said that Stanley Yelnats stole a pair of shoes. He didn't really steal them. Someone else did. Anyway, he went to the judge. The judge gave him a choice to go to Camp Green Lake or jail. He chose Camp Green Lake. There he had to dig holes. They had to be five feet wide and five feet deep. They are digging holes because the Waden is looking for treasure. Stanley's great-great-grandfather was robbed by Kissin' Kate Barlow and she stole all his money and treasuer. After he was there awhile he made a deal with a boy named Zero. Zero can't read or write so Stanley teaches him. If Stanley taught Zero to read and write, Zero would dig part of his hole each day. After awhile the other boys there saw what was going on and didn't like it. All the boys got in a big fight. Soon after that Zero runs away. Then 3 days after that Stanley runs away to find Zero. To find out what happens next you should read the book!!!

I think this book is great because it is adventurous and I love adventures-lLike when Stanley and Zero climb the mountain. I love this book because you don't know what is going to happen next, so you don't want to put the book down. Sometimes it's funny and sometimes it's serious.

I think everyone should read this book. Kids under 8 may find it a little hard to understand. So if you see this book, read it. Also, read other books by Louis Sachar.