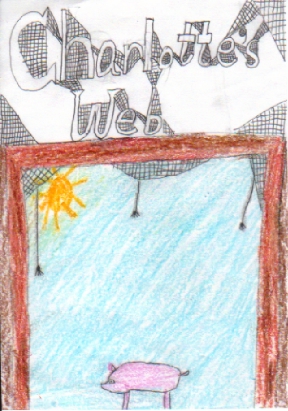 One day a girl named Fern stops her Dad from killing a pig that is a runt. She asks if she can take care of it rather than kill it. So her Dad said ok. Fern names the pig Wilbur. She takes care of him till he is old enough to take care of himself. Fern's Dad sells Wilbur to Fern's Uncle. After that Fern goes to her Uncle's a lot. Wilbur is always lonely even when Fern is there. Then one night Wilbur was about to go to sleep when he heard a voice. He asks "Who are you?" But the voice said that he will see when he wakes up. The next morning he saw who it was. It was a spider named Charlotte. After that Wilbur was not lonely any more. One day Wilbur was talking to a sheep and the sheep said that Fern's Dad is going to kill Wilbur for Christmas dinner. Then Wilbur asks Charlotte to save him. She has an idea that will do the trick. She will write words in her web. So the first time she writes "Some Pig". The second time she writes "Terrific". Fern's Uncle thinks that Wilbur is famous so Fern's Uncle takes Wilbur to the fair. At the fair, Wilbur wins first place. When they get home they put Wilbur back in his pen and go inside. Then Charlotte has some very sad news. You will have to read the book to see what happens next.

I recommend this book to ages that are about seven and up. It is a pretty good book to read. You have to read it slowly so you don't miss anything. So if you would like an exciting book, I think this would be good.