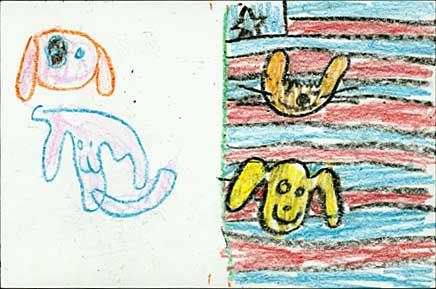 Miss Bindergarten got ready for Kindergarten. She put away all of the toys. She put up alphabet posters. Then she measured her bird. Then she was finished cleaning and then she waited for the kids to come. The students were a zebra and a frog, a cat, the elephant, and the hippopotamus, and the tiger. Some of the animals took a bus to go to school. Some ride their bikes, the kangaroo jumped to school and some students walked. One student was in a wheel chair. At the end they listened to the teacher and they said ?oh oh the fun?s begun!?

I (Kasandra) felt that book was funny and I liked the book because the animals went to school. I liked the story because I liked the names. Their names sound pretty. I (Tanairi) like the dog and the elephant. Their names are Danny and Emily. The Cat looked for his shoe and he was funny. He looked for his shoe under the dresser. Ms. Bindergarten rushed to put away all of the toys and then her hands and arms looked like an octopus. All of the children rushed to get ready to go to the school. I was laughing because the funniest part of the book was when Henry Fetter was fighting his sweater. Kasandra liked the colors and the pictures because the pictures were funny.