Reviewed by student in The Sharks 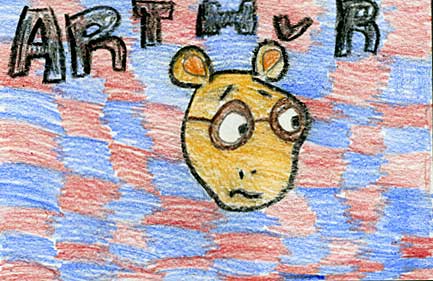 On his way to camp he sees his friend Buster there and there was a new kid with a hundred new comic books in his locker. The boy?s counselor is meaner than the girl?s counselor. There are amphibians in the boy?s tent. The girls kept winning the competitions, and Francine called Arthur four eyes. The girls thought the boys put a smoke bomb in their tent, and the boys thought the girls hung up their clothes on the pole. At night they all heard footsteps so they got scared. The boys realized that the girls didn?t hang up their clothes. The girls realized that the boys didn?t put a stink bomb in their tent. To find out what happens read the book!

My favorite part is when Arthur tried to sneak away, because it was funny when they found him. This book is the same as Arthur?s Halloween because Buster was dressed up like a monster and Arthur got scared and he ran away. It?s funny because Arthur writes letters to his parents and his parents don?t answer back and they just leave him there.