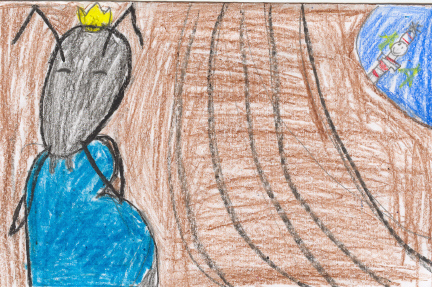 This book is about some ants and a boy that is a bully to ants. Another boy is a bully to him. The smaller boy is bigger than the ants so he bullies them. One day, the ants took him to see the queen. She asked why he was throwing water at the ants. The ant queen shrank him and made him little. He had to work like the other ants. He had to bring food. He had to fight spiders. Then the boy wanted to go home. They told him to get a jelly bean and said they would let him go. He almost got killed by his dad because he thought he was an ant. Some ants got killed. The queen was very sad but she said he was brave so she let him go and made him big again. The boy ran into the bully again, but the ants helped him get revenge! Read the book to find out how!

I liked this story a lot because I like the ants and the artwork. I am pretty good at drawing ants too and I enjoyed drawing a picture from the story.

This book made me think about bullies. If I knew a bully, I would be scared. The kids at my school are nice, though. They understand that it's important to be nice to other kids.

This book reminds me of that book, "Hey, Little Ant". That's a story about a giant boy who tries to kill the little ants. The boy is convinced to not hurt them anymore.

It also reminds me of the insect unit that we did in my class. I didn't want to touch the bugs. I collected an ant for my project and a grasshopper too. I also had a beetle.

This is a story that other kids would like because it's funny. All the ants attack the ant bully. If you don't like ants, I think you would like this story anyway. It will make you like ants more because they're not mean.

MMR3
is a student in
Mrs. McDonald's ELL Students