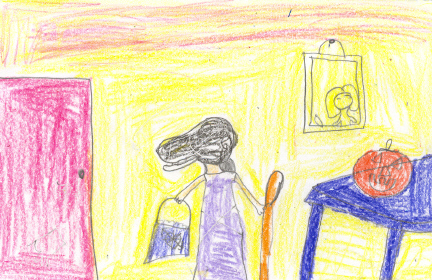 I liked this book. It was about a frog who wants to dress up for Halloween. He makes a jack-o-lantern. He wants dress up as a Super Frog, or a ghost or Dracula or a monster. He can't decide what to be. He was scared at night. He decided to dress up as a frog prince. The girl frog kissed him and it scared him. Then they saw a witch. They were scared. Froggy's trick-or-treat bag broke and the candy was in the floor. He lost all of his candy but his mom gave him chocolate covered flies to eat.

I have read other Froggy books. In one book, Froggy played football. I want to read more books about Froggy.

I like the pictures in this story. The illustrator uses lots of good colors.

I want to go trick-or-treating next year for Halloween. It looks like it would be fun. I haven't ever gone before.