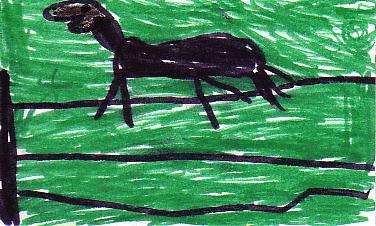 This is a great book about a pony named Blaze and his owner named Billy. In this story they try to catch a wild pony.

Billy and Blaze meet a nice cowboy. The cowboy has been trying to catch a wild pony. Billy and Blaze say they will help catch the pony. A lot of other cowboys are chasing him too. They name the pony Thunderbolt because he is so fast. Thunderbolt becomes friends with Blaze and now Billy has two ponies.

I like to read books about cowboys. I like the pictures because they are interesting. My favorite part is when they tame the wild pony and can be friends. There are other books about Billy and Blaze that you can read too.