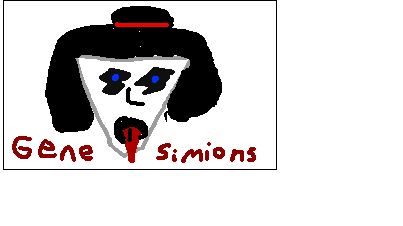 Kiss is a band that was one of the most popular bands.

The story begins with a little boy. His name was Gene. He lived with his mom and dad in a house that was made of hay. The little boy's mom would always defend him, so whenever a boy touched him his mother would slap the other boy. One day, a boy punched Gene right in the face. Gene's mom put a piece of steak on Gene's face to make it feel better. Gene's mother went to the boy who did that to her son and started slapping his bottom so hard that she wouldn't stop until he cried. When Gene was 12 he moved to New York with his mom. They lived with his uncles. Eventually, Gene grows up to be a singer. His band was called Kiss. They painted their faces. Gene now has 2 kids with his wife.

I think that the book is a really good book because Gene is talking about his life as a little boy and he grows up to be a singer. My favorite part was when the Gene's mom was spanking the boy who punched Gene.Gene's mom reminds me of my mom becuase if somebody hit me my mom would want to talk to him or let me hit him back. I think that the author's writing is cool and that he writes really nice. He kind of writes like me.