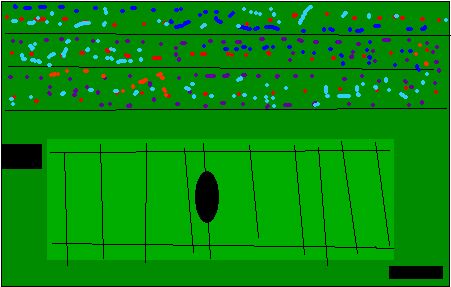 If you want to read a good book read Crash. The book is about a 6 year old. He likes to play sports. He always wants to be the center of attention. Another main character is Abby, Penn, Jane, Mike. Some of these characters come into the book later on. Those characters are Penn, Jane, Mike. While Crash was outside playing with his water gun he met Penn. Crash didn't have a good felling about Penn. He thought that Penn was weird. Crash didn't want to be his friend. Crash started shooting Penn with his water gun. You could tell that Penn didn't like it. But Crash was a bully so he didn't care. He doesn't like to play with guns because of his religion.

Now Crash is in 7th grade. He meets a girl named Jane. He starts liking her but she doesn't like him. Jane and Penn join cheerleading. Crash joins football and he is the best in the whole team. Mike and Crash get into a big fight and stop being friends. Penn and Crash become friends. Crash likes people based on the way they look. He learns to get to know them first. That was a mistake was made by Crash. I think that the writer was trying to tell us that never take anything for granted.

What I thought about this book was that it was fun to read. I was glad that our teacher read this book to us like a class. But the thing that I didn't like that our teacher read to us too slow. I really liked the book. It was very interesting. My favorite part of the book was that Crash became friends with Penn. I really like that part because,it was really heart felt. I thought that it was very cool . When my teacher finished the book I thought that there was another part to it, but there wasn't another book. I think that the writer should make another book. Some characters that I thought were interesting were Penn and Jane Forbes. Jane liked Penn but I don't know how she could like him over Crash. Penn dressed weired. This is not like any other book, because this book is very interesting. It has very cool details. I think that even teenagers would be interesting in them.

Anna C.
is a student in
Ms. A's Class