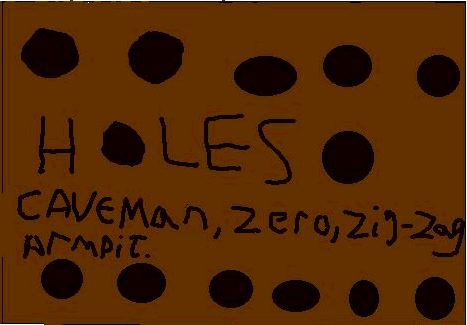 This book is about a kid named Stanley Yalnats. One day he walked under the bridge and a kid had tossed some shoes off the bridge . They fell on Stanley and he fell when they fell on top of him. So about five minutes later the "'Police'" thought that he had stolen them, that's how he went to Camp Green Lake. When he went there he met a lot of people there. Their names were Zig-zag , Armpits , Zero , Twitch. They were good friends, but Zero didn't know how to read, so Caveman showed him. Stanley met them and they had to dig holes with his friends. About a year later Stanley left Camp Green Lake.

I really enjoyed reading this book because it was very interesting and it is a good book to read. My favorite part in the book is when they threw the shoes at Stanley because he fell funny. One of the characters reminded me of myself because I didn't know how to read like Zero, but now I do, and so does Zero because Stanley taught him. When I read this book I felt like I was there digging up holes and finding stuff underground.

I would recommend this book. I think a good reader would like this book because they would understand it more. It would interest the reader. The plot is weird you never no what's going to happen next. The setting is in Camp Green Lake and the mountains. The author writes with simple words and it is easy to read.