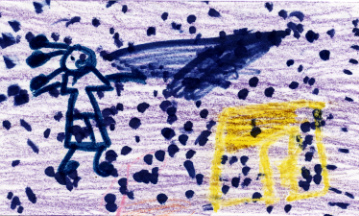 This book is about when Sophie got angry at her sister because she was mean. Her sister grabbed the Gorilla doll away from her. Sophie told her mother, but her mother told Sophie it's her turn. When Sophie gets angry, she gets really angry! She roars, she smashes things, and that's bad. She ran out of the house. She was running and running and then she cried, and then she climbed a tree. She heard a sound going like "Tweet!" and "Squeak!" and "Chirp!" and "Hoot!" and "Chrrr!" I finished the book, but I'm not going to tell you the ending!