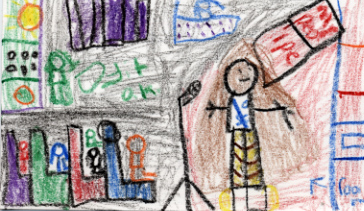 ?Sun Song? is a poem about the sun, the earth, the stars, and how people are like them. One part of the poem is about nature. The other part is about black people and their struggle. The poet himself is black and wants to write a song for his people. The sun and the other parts of nature remind him of his people.

I liked this poem because it is about black people and I am one of the black people. I liked the line ?dark faces of Africa? because the poet is not talking about color, but about something you can find in nature. This poem reminds me of Dr. Martin Luther King, Jr. and his message to follow one?s dream, especially for black people.

?My People? is a poem that compares the night to faces, and stars to eyes. The night is dark and the poet compares it to faces that are dark ? the poet sees beauty in both things. The sun reminds him of white people, who he also thinks are beautiful. At the end of the poem he talks about souls. They are important because they make people strong.

I liked this poem. It made me feel happy because the words are real and honest. But sometimes they also made me feel sad because the poems do not include all black people. I liked the last line of the poem because it is saying that the souls of people are beautiful ? what is inside and what we dream.

I would recommend both poems to my family and friends, and especially to people who like reading poems. These poems are written mostly for black people, but anyone can read them.