Of Mice and Men

Of Mice and Men 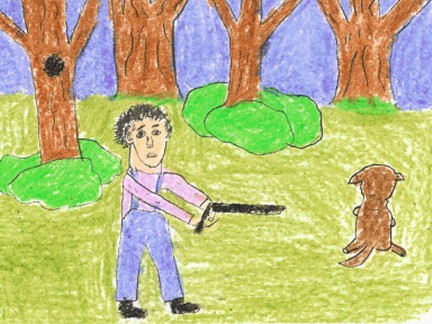 George and Lenny just got fired from their old job. They got fired because Lenny is not smart and did something wrong. So, they found another job and they are going there soon but they came late.

George and Lenny are friends and George is sort of smart but Lenny is dumb. Their plans are to own their own land, so they work to try to get enough money. Do you think George and Lenny will get their own piece of land?

I thought that the book was like No Promises in the Wind because in both books the main characters need money. They are both realistic fiction and the stories both happened in the past.

I did not like Curly. Curly is the boss? son and he is a small fighter who likes to pick on people who are taller than him. I did not like him because he was punching Lenny.

My favorite characters were George and Lenny. They were friends and they are opposites. Those characters are my favorites because they help each other and they take care of each other.

Michael O.
is a student in
Brianna's Readers & Writers