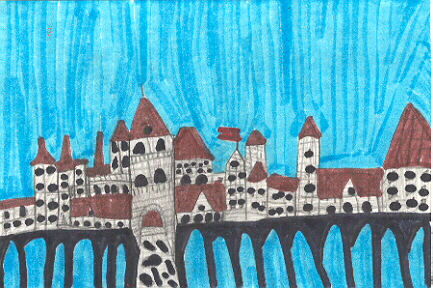 This book is about a boy named Harry Potter who goes to Hogwarts, a school for witchcraft and wizardry, for the very first time. Hogwarts is a school that teaches you about magic and spells. Before Harry goes he receives a letter from the head mistress telling him about Hogwarts and inviting him to come. Mrs.and Mr. Dursley, Harry's aunt and uncle don't tell him about it. Later on a mysterious person comes to visit Harry and helps him get to Hogwarts. The rest of the book is about Harry's adventures at Hogwarts, his conflict with a professor and about his friends he makes there. I'm not going to tell you the rest you will have to read it yourself. The main characters are Harry, Ron and Hermione.

My favorite part of this book is when Harry, Ron and Hermione were playing wizard chess on a gigantic chessboard made out of marble and cement. I felt excited as I read this book. It was action packed, full of adventure and fun to read.

I recommend this book to people who like magic and adventures. Kids in third grade all the way up to adults would like this book. If you read this book I hope you enjoy it as much as I did.