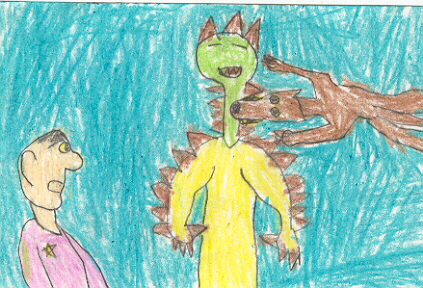 Animorphs the Unknown is about five kids who were given the power, by a good alein, to morph into any animal they touch. They have to use this power to fight off the evil Yerk alien invaders. The invaders plan is to take over earth by slithering through an innocent person's ear, wrapping around the victim's brain and controlling their body! The Animorphs' world is secret, where they live, their last name, and much more. The Animorphs must stop the Yerks from doing their most evil plan of controlling horses so they can take over Zone 91, the most secret military place on earth. Now the Animorphs must stop this plan with the help of an alien friend. Ax, an Animorph, and the other Animorphs; Cassie an animal lover; Jake the leader; Marco a goofy joker; Rachel a fierce but beautiful person; and Toibias the Animorph who has been turned into a hawk, must succeed or this could be the end of earth.

I like this book because unlike most I've read, it's narrated by a character in the book and the character really describes how she feels. My favorite character is Marco beacause he's so much like my big brother, Michael. He's very humorous but not very adventureous. I think this was the most complex book in the series, but it had the same moral as the other books in the series. The book had no illustrations but it didn't need them anyway because it drew such a good picture in your head. I wouldn't want to be an Animorph because you'd have to kill so much and I don't like killing. I've never seen a book in this style of writing.