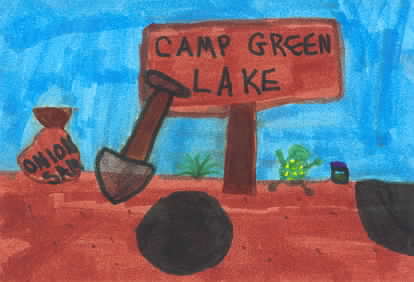 Stanley Yelnats has never been very lucky. That's because he is under a curse, a curse that started with his no-good-dirty-rotten-pig-stealing great-great-grandfather. Stanley is unjustly accused of stealing! He is sent to Camp Green Lake, where there is a dried up lake, and a myriad of holes. Stanley is forced to dig holes to build character. The holes must be five feet wide, and five feet deep. Soon, Stanley realizes that he is not digging holes to improve his character. Someone is looking for something, hidden somewhere in the dry expanse that was once a sea-green lake. Then, something happens to his best friend, and Stanley ends up on the most dangerous and amazing journey of his life.

I loved this book. It had adventure, romance, and comedy. I think that both boys and girls would like it, because it's about a lot of different characters. My favorite characters were Kate Barlow and Zero Zeroni. Kate Barlow was a brave woman with opinions of her own and the love of Onion Sam to keep her dreams alive. Zero was one of the boys at Camp Green Lake. He hardly ever spoke, so everyone thought he was stupid. He was really very smart, and turned out to be a great friend. When I read this book, I felt many different emotions. Sometimes I laughed, and other times I cried, and every once in a while I squeaked like a mouse, scared or excited for the characters as if I were right there with them. When I started reading it, I couldn't stop, and my mom had to pry it out of my hands. It really made me think. I realized how lucky I was, to have a mother and father, to have warm water, to have clean clothes, and especially to have the freedom to be friends with any person, regardless of their color, religion or gender. Wouldn't you be upset if you weren't allowed to fall in love with someone, just because of the way they looked, or the religion they were, or the things they believed. Some of the words in this book will never come out of my mind as long as I live. That's why "Holes" is such a good book.

I recommend this book to anyone who likes adventure, friendship and superstition. It has a curse, an unusual group of friends, and some fantastic characters. I think that fourth, fifth, sixth and seventh graders would like it. Holes is a great book!