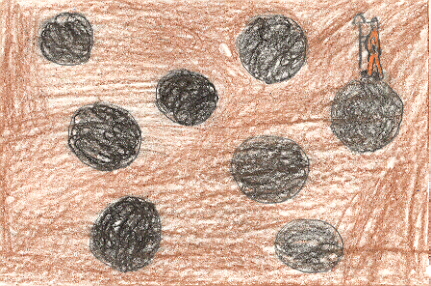 There is no lake at Camp Green Lake, just dry land. "Holes" is about a boy named Stanley Yelnats who is accused of stealing the shoes of the greatest baseball player alive, but he just happened to be at the wrong place at the wrong time. His father had been working on an invention to eliminate feet and shoe odor. When the shoes fall out of the sky and hit him in the back of the head, he thinks it is his father's big break, but then the police show up. While at court, he has to decide to go to prison or to go to Camp Green Lake. Stanley unfortunately chooses Camp Green Lake. While at Camp Green Lake, Stanley makes many good friends, and digs many large holes. He also uncovers his great-great-grandfather's lost treasure.

I really like this book because it has funny situations, funny characters, and serious situations. When Stanley and Zero run away from Camp Green Lake and have no food or water, the reader feels worried for them. I also like Stanley and how he always makes hilarious comments and actions. There was one particular funny thing that I really liked, it was when Stanley steals the water truck and doesn't get far, because he runs into a giant hole. This book is not part of a series, but if it were, the series would be magnificent!

I highly recommend this book because it has everything a book needs such as description, funny parts, serious situations and funny characters. If I had to rate this book from one to ten, I would give it an amazing score of ten! If you like action, adventure, and highly descriptive books you will like this.