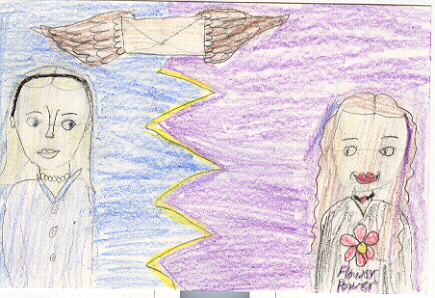 "P.S. Longer Letter Later" is about two girls named Elizabeth and Tara*Starr who write to each other by mail. At the beginning of the book, Tara*Starr and her family are having some problems with money, so Elizabeth helps Tara*Starr through her hard times. Then towards the middle of the story, as things in Tara*Starr's life get better, things in Elizabeth's life get much worse. The first thing that happens to Elizabeth is that her father gets fired from his job. Elizabeth's mom volunteers at a shelter that feeds the hungery called Kate's Kitchen. Elizabeth's mom needs a job that pays. Fortunately, Kate has to go out of state to care for a family member who is sick, so Elizabeth's mom gets the job right away, but her dad continues to have a spending problem. Elizabeth's family decides to auction off most of their belongings so they can afford a one bedroom apartment. Tara*Starr is proud of Elizabeth because she is finding solutions to her problems, and standing up for herself more. The day her family moves to the apartment, her dad leaves the family for good. But this doesn't stop Elizabeth from being the strong person she is, and it doesn't stop Tara*Starr from helping her through her hard times.

I like this book because it gives good detail, it has a good theme, and I like the characters. They are strong and help each other through hard times. I think the book is very good because it makes you think, and it has a lot of humor. My favorite part is Christmas because it's a very joyful part of the book, and it makes you feel warm inside because all the family exchange gifts and share love with each other. It's great how Elizabeth and Tara*Starr help each other through hard times, and Elizabeth stays so strong in such a bad situation. My favorite character is Tara*Starr because she is strong, humorous, and she is good at giving advice about money problems to Elizabeth, because she knows what to do from experience. This book taught me how to be strong during hard times. I think this book is different from other books I have read, because although the text is simple, it has a great meaning. This book has a sequel called "Snail Mail No More" that I really think I will enjoy because I enjoyed "P.S. Longer Letter Later".

I recommend this book for grades five and up. I am sure that whoever reads it will find it interesting and clever. So if you like books with description, and touching letters, pick this book up. I can assure you, you won't regret it.