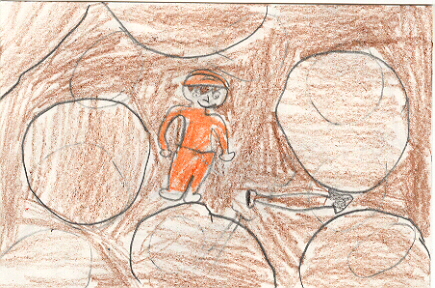 What would you think of digging a hole every day that was five feet wide and five feet deep in the hot sun? In "Holes" by Louis Sacher, this is just one of the many crazy things that happens. It all starts when Stanley is walking home from school and a pair of shoes fall from an overpass onto his head. A policeman finds Stanley and takes him to court because the shoes belonged to a famous baseball player. He has a choice to go to jail or Camp Green Lake. He chooses Camp Green Lake because his family had always been too poor to send him to camp. Once he gets there, he is greeted by two men named Mr.Sir and Mr.Pendanski. Day after day Stanley digs holes, and one day he finds a little golden tube. The deal at Camp Green Lake is that if you find something that the warden likes, you get the day off. So, when a boy named X-ray sees the tube, he tells Stanley that he deserves a day off more than Stanley. Stanley just doesn't seem to have any luck beacuse after that, a boy named Magnet steals some sunflower seeds, and they fall into Stanley's hole. Mr. Sir sees them and brings Stanley to the warden. When they are talking to the warden, she starts putting nail polish on, and then she gets so mad that she smacks Mr. Sir across the face, leaving a mark on his cheek. It's too bad because the nail polish is made out of snake venom. It turns out that Zero, one of the other "campers" just can't stand it anymore so he runs away. A couple of days later Stanley goes after him. As you can see, this book is full of crazy happenings. So what becomes of Stanley and Zero? Will they ever get back? Read the book and find out.

I think this is a good book because it tells about the characters, gives description, and it's funny. I think Stanley reminds me of me because he gets blamed for stealing Clyde Livingston's shoes, just like my brother blames me for doing something. My favorite characters are Stanley and Zero because they are smart, brave, and funny.