The Lord of the Rings: The Two Towers

The Lord of the Rings: The Two Towers 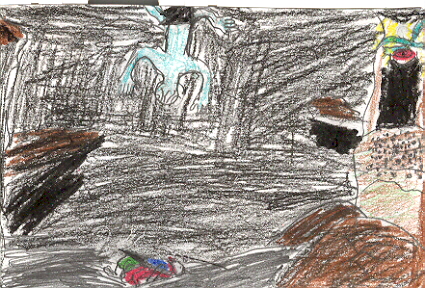 When the whole world of mankind is threatened by a wizard, Aragorn, the true king, the fallen king of Gondor, has to rise and lead the people of Rohan against the evil wizard's army. Frodo, the hobbit, needs to destroy the one ring of power by casting it into the flames of Mount Doom, the very place where the ring was forged in J.R.R. Tolkien's "The Two Towers". Aragorn and his companions set off to search the plains of Rohan for the two hobbits, Merry and Pippin, who had been kidnapped by the Urak-Hai, the evil henchmen of the wizard Saraman. After finding evidence that the two hobbits are indeed alive, they meet an old ally. While Aragorn and the others rejoice over their old ally's return, the two hobbits, Frodo Baggins and Samwise Gamgee, travel to Mordor, the land of shadow, on a dangerous quest. This quest is to destroy the one ring of power, which can be done by throwing it into the flames of Mount Doom. They endure many hardships in their travels. They must constantly be on the lookout for enemies. Meanwhile, the old ally consults Aragorn and his companions about Saraman's activities at Rohan. It is their job to stop him from destroying mankind. They do all they can to protect the innocent and to keep them out of the hands of Saraman and his forces. To learn the outcome of these events and more, read J.R.R. Tolkien's "The Two Towers".

I enjoyed this book very much because of all the description, and the languages that Tolkien creates are spectacular. Each character has a specific strength. Aragorn is gifted at following trails and foot prints. Legolas, one of his companions, is better at seeing from far distances, while Gimli navigates well through caves, mountains and caverns. It's also amazing how Tolkien shows the strong relationships between these characters. For instance, Merry and Pippin risk their lives to save Frodo. Another incredible thing about this book is the description. As I read the book, I could easily imagine what the characters and creatures looked like. One of the most vivid descriptions was of a battle between the Urak-Hai and the people of Rohan. This is one of the best books I've ever read because it's a fantasy that challenges you as a reader and tells a great story. To really enjoy this book, you need to understand that it starts out a little slow; it's worth it if you keep reading.

I recommend this book to anyone who likes such books as "Redwall", "King Arther, Merlin's Mistake" and "Harry Potter". So basically, if you enjoy action and can stand the suspense, you'll like this book. Remember it will be worth your time however long it takes.