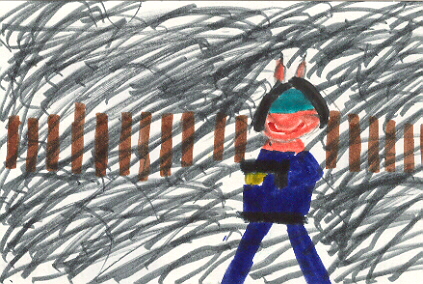 When the fairy of city New Haven is threatened by mud men imports [humans] to arm outlawed weapons, the fairies call in the only mud man who knows about them: Artemis Fowl. When they question him they learn that he also has a problem. His dad had been kidnapped by the Russian Mafia. After making sure he is not the one sending down the illegal shipments, they strike a deal. He and his man servant agreed to help the fairies stop the shipments if they help him rescue his father. However these shipments are going down to goblins, which means there must be a traitor on the inside. If there is, who is it? After a daring battle with goblins, a fight in a French apartment, and a breath taking raid on the enemy, will they be able to save both Artemis' father and the Fairy City? Read the book to find out.

My favorite part of the book is when Captain Short, Root, Artemis, and Butler infiltrate Kopi labs. It's the best part of the book because it is filled with lots of action, excitement and adventure. My favorite characters are Butler and Artemis. Butler is always doing something to save Artemis and the fairies. I like Artemis because he always has a plan and he's really smart. This book is part of a series of two books, the first being Artemis Fowl. This book is similar to the first one because most of the characters are the same. It is also different because you go underground to New Haven.