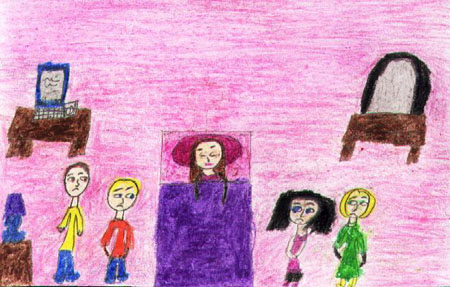 The main character in this book is called Amy Candler. Amy is a clone. There was a project called Project Cresent, where scientists wanted to create clones. But the laboratory was blown up. A scientist named Nancy Candler took a baby clone in.

Ace Tolliver, a business tycoon, wants to set up a club for kids ages 11 to 15. Amy, who is now a teenager, thinks drugs are being served there though. Suddenly, Amy gets a fever, and that?s not good, because Amy never gets sick. Nancy, Amy?s two best friends Tasha and Eric, and Dr. Hopkins don?t know what to do. If they don?t find a cure, Amy might die.

My reaction to this book was that the author but a great deal of detail into it. I liked Amy because she tried her best not to let anyone know she was a clone. I could relate to her when she was getting a fever. I was always hot, tired, and irritable when I had a fever.

I recommend this book to people who like adventure and suspense. I think this because Amy knew Ace Tolliver was serving drugs at his club, and Amy tried to stop him. She planned just like you would to find out something. Another thing I liked was that Nancy, Dr. Hopkins, and Tasha and Eric didn?t know if she would be okay. I couldn?t wait until the end to find out if she got better.

I think people who like to read about other people?s secrets would like this book because they keep saying, "Don?t tell anyone you are a clone." I think kids in grades four through seven would like this because it is sophisticated, but not too grown up. Kids over seventh grade wouldn?t like it.