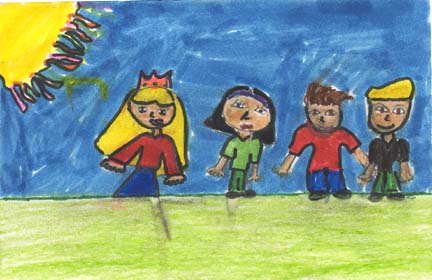 This book is about somebody robbing the Lumpies' village. The kids named Eric, Julie, and Neal go to find the creature that stole from the Lumpies. They think it is a creature because they had a dream about it. It can't be Lord Sparr because he disappeared. Eric, Julie, and Neal went to the Lumpies' village with a princess called Keeah. When they got there, they found a scale of the monster?s skin. That gave them a clue that the monster was close by. Read this book and see if they solved the mystery.

Lexus thinks Tony Abbott made a good mystery because it gave her a close idea of what's going to happen. Syra thinks that this is a good book because Tony Abbott uses a lot of details and is a good mystery writer. We like the part when Eric,Neal, and Julie took spoons and shot meatballs at the Ninns (the Ninns are monsters).