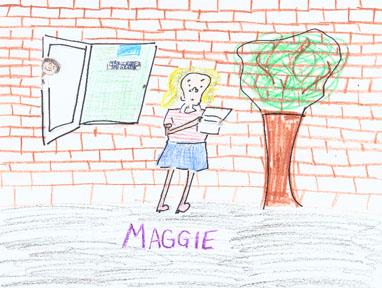 This book is about a girl named Maggie, and how she hates to write in script handwriting. She tries different ways to get out of it throughout the book. One way she tries is when she used the font in her computer to write script for her. After that, her teacher decides to play a trick on her. I won?t tell you the whole trick, though. I will tell you that Maggie earned the job of script patrol, even though she can?t read script writing. The teacher in the school hands out notes written in cursive and asks Maggie to deliver them for her. Every time Maggie looks at the notes, the only thing she can read is her name. Maggie then starts an investigation to learn script. Sooner or later, she was realizing that other people weren?t connecting their letters properly. The last note that the teacher wrote Maggie was able to read to the principal. The principal wrote back on the bottom, ?I new you could do it.? Ms.Leeper then wrote, ?Great job, Maggie!?

I think Muggie Maggie is a great book because it is funny and Maggie tries to play a trick . My favorite part is when someone has to be the script patrol. Maggie raises her hand not because she wanted to, but because she thought what are the odds for her to get it. So Maggie got chosen for script patrol. The greatest thing about this book is it reminds me of myself in the 3rd grade, when I didn?t want to write script. It seems silly to me now, because as a fourth grader I can?t stop writing in script. Even when I try to write in print by accident I write in script. This book taught me a lesson to try things before saying no, because I love script now, just like Maggie. I almost forgot to mention, do you know why this book is called Muggie Maggie? It is called Muggie Maggie because when Maggie writes in script she does not close her ?A?. So that?s why this book is called Muggie Maggie. When she was in school I felt bad for her because kids in her class made fun of her and call her Muggie Maggie. The kids are mean, but I like how Maggie over comes script.

I would recommend this book, because it is funny and you never want to stop. This book would be good for 2-4th grades for storytime for a teacher to read out loud to his or her class, because the book Muggie Maggie includes teachers and students. I think all students should have a good relationship with their teacher. I do. Buy it anywhere for only $4.95. Go out and buy it!