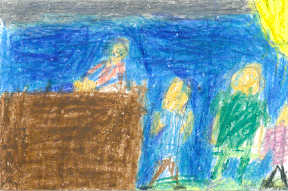 The boy in this story doesn't understand a lot about words. He thinks that his arms and legs will get all tangled up when his teacher tells his class to stretch their arms and legs. The main character in this book tells the story. The whole book uses sayings that mean something different than what the main character thinks.

My favorite part is when the main character's neighbor says he has a joke that will crack him up. The boy runs away because he thinks that he will really crack and fall apart. This book has great pictures because they show what the boy thinks will happen to him. The boy telling the story reminds me of my sister because she is little and sometimes doesn't understand what some words mean.

Some kindergarteners could read this book, but mostly first and second graders would be able to read it by themselves. Anyone who likes to laugh will like this book.