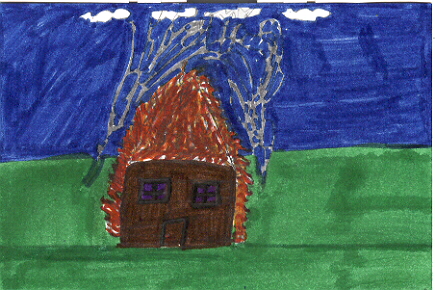 In the book a boy named Dewey saved his grandma and his dog. In the beginning of the book Dewey was outside making a raft. Then Dewey saw them come by the house. So he got the gun and fired. Dewey, his grandma, and his dog got on Dewey's raft and sailed to the Dargan's house so they can be safe. To find out what happens to Dewey on his adventure you have to read the book.

I like the book because the characters in the book are cool especially Dewey because Dewey is brave. My favorite part in the book is when Dewey saved his grandma. I found the grandma interesting because she always has her chair with her when she goes everywhere. Dewey reminds me of my brother Elias because my brother Elias is always so brave. The grandma changed a little bit because she was mean then she was nice. There wasn't any illustrations. I think that the author could probably put pictures in the book. The special thing in the book is the great big words in the book. This book is like the book called The Pinballs because the Pinballs is like Trouble River.