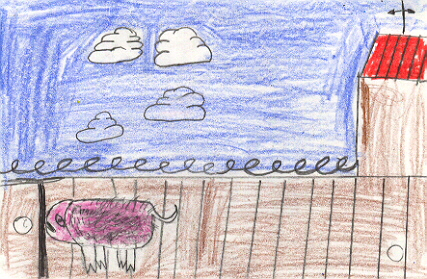 This book is about a girl named Fern that lives in a farm with her family. One morning she asked her mother, "Where is dad going?" Her mom told her, "To kill the little pig." Fern ran out to stop her father. She got there just on time. She asked her dad if she could have him. Her father asked her, "What do you know about raising pigs." Her father gave her a chance to raise the little pig and she named him Wilbur. Soon Wilbur grew big because Fern took good care of him. Very soon her family sold Wilbur to uncle Zuckerman. Zuckerman will eat him for dinner. Wilbur meets a spider named Charlotte in his pin. They became good friends. Charlotte thinks of a plan so they won't kill Wilbur. Read to find out if Charlottes plans works.

My favorite part was when Wilbur escaped but then Fern's uncle saw him. Zuckerman was trying to catch him so he showed him the food and he caught him. It reminds me of my life because one day I was trying to catch a dog and I showed him some food and I caught him. It felt funny because when Wilbur was a baby Fern put him in a stroller and took him for a walk with Fern's doll. If you want to know if Charlotte saves Wilbur or not you should read the book Charlotte Web.