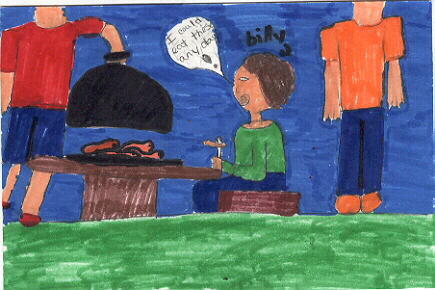 This story started with a boy named Billy who makes a bet with some other boys that he could eat fifteen worms in fifteen days. If he can do it he would get fifty dollars and if he couldn't do it he would have to give the other boys fifty dolors. However, along the way Billy starts getting sick and thinks he is going to die. When the two other boys find out the news they try to cheat and write a note acting like doctors.

My favorite part is when he finds out who wrote the note and why they wrote the note. But his father new who wrote the note the entire time. My favorite character was the real doctor because when the mother of Billy calls and asked if it was OK that her son was eating a worm every day for the last five days he says it is OK as long as he doesn't continue. To find out what the note said go to your school Library or Public library and check out How To Eat Fried Worms.

I believe that you will like this book because I did. It was very interesting to read about a bet. If it were you in the bet, do you think you could eat fifteen worms in fifteen days? This story reminded me of my brother who likes to bet a lot. He always bets me about things he knows I can't do. Do you have other older family members that do that too?