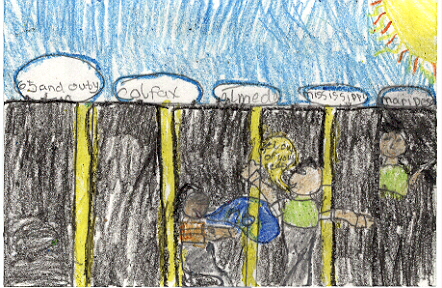 Why did Martin feel bad for himself when he saw the signs white only? When Martin was a little kid he saw the signs white only. When he saw those signs he felt bad for himself. He remembered what his mom said, "you are as good as anyone." So what actually is going on in this book is that he wants everybody to be friends and play nicely. Martin grew up to be a minister. He helped Rosa Parks when a white man told her to get out of her seat. To find out the life of Martin Luther King Jr. you should read this book.

I think back in the old days the black people were treated badly because the white people got to sit in front of the bus and the black people had to sit in the back of the bus.I think you should have a right to sit where ever you want on the bus. My favorite part was when Martin grew up to be a minister. I liked that part because when he was a little kid he said he was going be a minister like his dad and it happened. Martin reminded me of my grandma because my grandma always goes to church on Sundays. My whole family goes to church on Sundays. I would like for all readers to read this book.

I recommend this book to everybody because everybody should learn to play together.