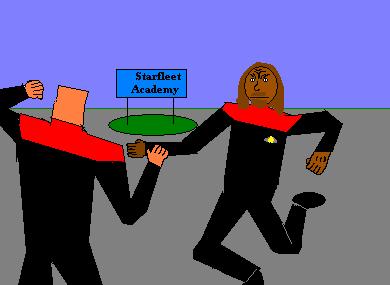 The book Worf?s First Adventure is all about a Klingon named Worf. He is a survivor of an attack on a Klingon space station. They were attacked by another race know as the Romulans. A Federation space ship (human?s and a multitude of other race?s ship) picked up the Klingon survivors from the station. Worf, being one of them, was believed to have no living relatives so he was adopted by a Federation person named Sergy Rozhenko. He then grew up in the Federation with him, his mother, and two brothers. Worf wanted to join Starfleet, the scientific and defensive space force for the Federation. First he had to go to Starfleet Academy on Earth in San Francisco where he could train to become a Starfleet officer. He goes with Simon, one of his brothers. When Worf arrives at Starfleet Academy he runs into social problems because he is a Klingon. He doesn?t know if he should leave now and not go through with Starfleet Academy.

Worf?s First Adventure is great book. I think it reflects nicely what it was like for Worf at Starfleet Academy. It has a surprise ending and is slightly sad at the very end. I also like how the book mentions and comes across several of the different characters from the different Star Trek Series.

I recommend this book to anyone who likes science fiction and knows a little bit about Star Trek already. You should also have about the vocabulary of fifth or sixth grader too. I believe if you have these qualities you can you can enjoy this book the most you could.