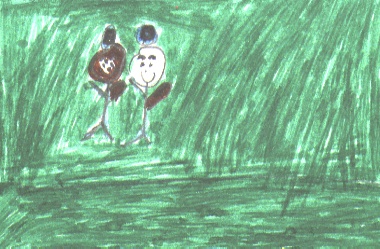 This book is about two different baseball leagues. They are the Negro Leagues and the Major Leagues. Jackie Robinson was the first black man to play in the Major Leagues. Branch Rickey, the owner of the Dodgers, did not care about having a black man in his Dodgers team. Jackie Robinson was the best player on the Dodgers team. However, he couldn?t eat with his teammates because of segregation. He couldn?t sleep in the same hotel with his teammates. Pee Wee Reese, his teammate, believed in doing what was right. He wanted to change the laws. He became his best friend and he made Jackie Robinson feel better.

The illustrations are black and white, but some are colorful too. The interesting part is that Jackie Robinson made a friend of a different race named Pee Wee Reese. The big ideas in the book include that it doesn?t matter if you have a black man on your team. The book is not like any other book that I?ve read because it has too much history. I felt like it was sad to have laws like that reading the book. The characters that I liked are Jackie Robinson and Pee Wee Reese. Both of them are great people to me. The book makes me wonder about black history I recommend the book to kids that like baseball. If you like baseball you should read the book. I like the part when Jackie Robinson had a new friend.