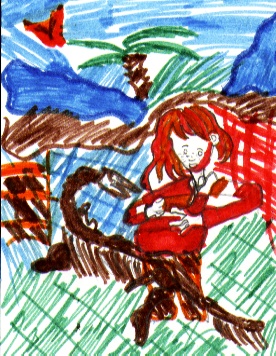 The I book just read was about Cam Jansen and the mystery of the missing dinosaur bones, illustrated by Susanna Natti. It?s about Cam Jansen going to the museum with her class and her teacher. Cam has a photographic memory. Camera is her nickname. Cam went to the museum before and saw that the dinosaur bones were missing. When she went back to the museum with her class and teacher she told the guidance counselor that the dinosaur bones were missing. Ms. Tyler told them, ?I?m going on a dinosaur hunt in a few weeks,? but Cam had stopped listening. She was busy studying the dinosaur?s tail. She had whispered to Eric, ?Something is wrong.?

I think the pictures in the story were good. I think other kids would like this story. I learned from the story ? not to steal from a museum. The character I liked from the story was Cam Jansen because she helped her teacher find the missing bones.

This is my first story about finding the mystery of the stolen dinosaur bones. I like other stories that have mysteries. I recommend this book to little kids that are learning to read because it?s not that difficult.

Michael M.
is a student in
PAL - New South Bronx