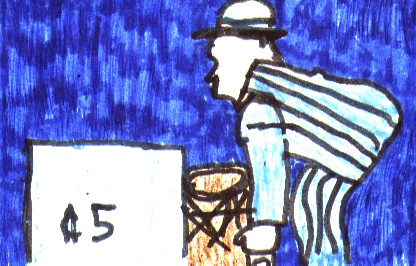 Alexander is a boy who didn?t want to move because he is going to miss a lot of the things he is used to. For example, he didn?t want to leave his stuffed pig, his ice skates and his toy dinosaur, Swoozie, his neighbor?s dog and his best friend Paul who is almost like having a brother.

Alexander was thinking of things to do so that he didn?t have to move. He thought of hiding from his parents in Mr. Pickles? old barrel or in the tree house. At the end of the story, he doesn?t have a bad time moving. He has a smile on his face.

When we read this book we were in a good mood because funny things happen like when gum got in Alexander?s hair, his room is all messy, and he makes funny faces. We don?t like the part in the story when Alexander?s brothers bother him, because they wouldn?t like it if Alexander did it to them. We like the drawings because they are drawn in pencil, and because we don?t know how to draw like that. We didn?t like the colors because they are black and white. I, Clarence, wonder why Alexander had a bad time moving since I moved last year and I didn?t have a bad time. If you don?t like moving and you are eight or nine years old, you should read this book.

Andres M.
is a student in
PAL - New South Bronx